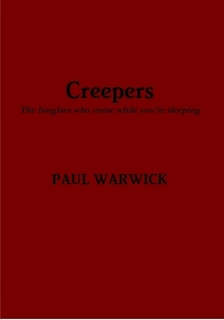 Will is addicted to crack and taking ecstasy at raves. To fund his habit he does aggravated burglaries, robbing rich people.

Peter is an ex-prisoner who’s going straight and studying filmmaking at college, hoping to become a music video director.

Will asks Peter to commit a crime with him and Peter reluctantly agrees. They break into a mansion in Richmond in the early hours of the morning. Then a series of events happen that will change their lives forever.

About the author
Paul Warwick is a 51-year-old Christian who suffers from schizophrenia. He became ill after spending many years of his youth in prison. ‘Creepers’ is Paul’s fourth book to be published. He is also a freelance journalist whose work has appeared in many national newspapers and magazines. And he’s an award-winning short film maker. Paul is married and has two grown up step-children and two daughters. You can see more of his work at www.paul-warwick.co.uk.